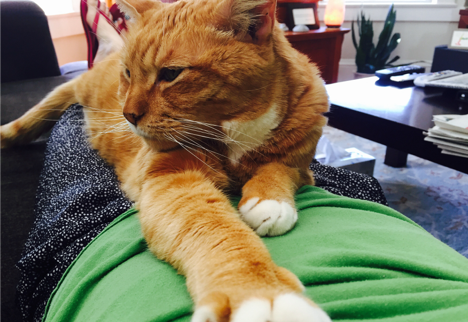 “Animals are the bridge between us and the beauty of all that is natural. They show us what’s missing in our lives, and how to love ourselves more completely and unconditionally. They connect us back to who we are, and to the purpose of why we’re here.” ― Trisha McCagh

It has been over two months since Pablo left us. It continues to leave a big hole in my life. The space that animals inhabit can be simple and to those who don’t have pets or connect with animals on a daily basis may not understand the incredible bond that gets created. They slow us down and help us honor the natural rhythms of life. They are ever present and pure, and there are days that I can’t believe Pablo was with me for so long, and that I was gifted to care for him.

To continue my story (Read Part 1), Pablo and I moved in to a larger apartment with Mitch on a rainy weekend seven years ago. He embraced his new surroundings and seemed to enjoy having more space. He didn’t have easy access to the outdoors anymore and I often say that he settled right into retirement. He established his own chair in the living room/kitchen area right in the middle of all the happenings. He liked to to be near 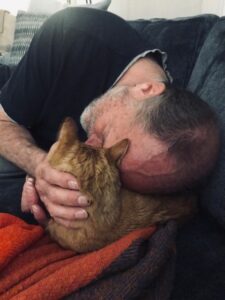 us. Pablo was content watching the crows fly out the windows and land on the power lines. He went outside when I brought him down the stairs to the little yard, or up to the roof. Pablo would sit in the sun for a half hour or so and then would quickly come back up to settle into his chair again.

When we would have parties Pablo would hang out right in the middle of the kitchen waiting for his meal if it was dinnertime, and wander around without any complaint about the noise and commotion. He had a calm and grounded quality to him that soothed me. He was the perfect home companion. When I came back from a very exhausting teaching trip to South Korea with a terrible case of jet lag, Pablo rested with me for days on the couch, laying on my torso or by my side while I got my bearings.

In early 2019, Pablo was diagnosed with kidney disease which was such a shock. I was presenting at South by Southwest in Austin, Texas when we found out he had gotten an infection that had to be treated right away. I couldn’t wait to get back home to be with Pablo. Luckily he stabilized quickly after getting on kidney medicine and we enjoyed another year and a half together. He was a steady support for Mitch and I during shelter in place as we spent many evenings on the couch together quarantined. His energy got a boost at the beginning as I spent so much time at home and we would play with his toys or I would pick him up and dance around the house.

The last few months of Pablo’s life were very painful. We had to start giving him subcutaneous fluids so he wouldn’t get dehydrated. Since we are both uncomfortable with needles, I relied on friends to come over to help administer the fluids. These were special friends who were willing to do this during the pandemic. We could see him slowing down significantly and soon eating became a chore as we would try to entice him with a variety of food choices to keep his weight up.

It finally became clear, even so very hard to let go, that he was suffering too much. The last day of his life I carried him up to the roof as crows were circling above cawing and flying. He was not phased by the activity; he purred and laid his body in the sun. Afterwards I played soothing music and sat by his side as much as I could. In the evening the traveling vet came to help us transition Pablo.

The missing is the hardest part.

I recently dreamt that Pablo was with me as I was traveling to unknown places. I got to hold him close in many parts of the dream, and at one point we landed in a large green field where he ran with joy and so much boundless energy. I awoke with a joy of my own.

“He could tell by the way animals walked that they were keeping time to some kind of music. Maybe it was the song in their own hearts that they walked to.” ― Laura Adams Armer